Dress Shopping In Hoi An 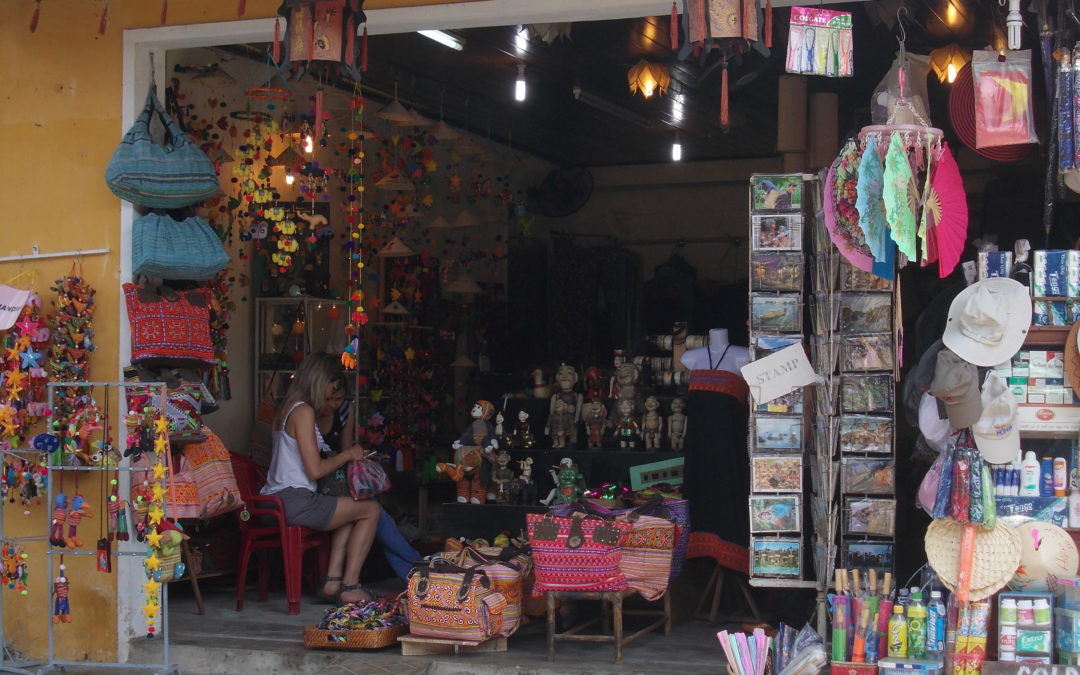 I met a nice elderly couple from England at breakfast time and invited them for dinner that evening. This isn’t something that I would normally do, but after being invited out by the Vietnamese family, I decided it was a nice gesture.

I was bamboozled into the first tailor shop I found but after seeing they had a book full of reviews I sat down and began filing through their magazines. I found a dress I liked and chose the material but then said I was leaving so I could think about it, and I was not buying in the first shop I came to!

I then found a tailor and paid to have my sandals re-made to fit my size exactly before I was then pulled into the market by another woman who showed me again a book of reviews, and I decided it was impossible to decide where to go, and to pick out the bad tailors from the good, so I just decided to go somewhere with good reviews that had a dress I liked. I had two dresses made there, a red silky one with a single shoulder strap and a blue dress with laced material over the top- similar to one I already have, but it’s now too small. It occurred to me that I was getting tailor made clothes having just lost a lot of weight, and that I am probably going to put all the weight back on when I return home, but there was not much I could do about this!

I then returned to the first shop and made the mistake of telling her I’d already bought two dresses. She got a bit hostile, saying “Why you not buy from me? Why you not buy from me??” So, annoyed, I said, “Look, I can’t go into a shop, see a picture I like in a magazine, then take it out the shop and bring it to you. I am here now, I am going to buy a dress or I am going to leave, what do you want??” She was then all smiles…

I was meant to be going to the beach but there was a storm coming so we sat in the thunderstorm in the heated pool at the hotel. I was slightly worried I may be going to get struck by lighting and electrocuted, but it was really cool!

I went to have my dress fitted and it was far, far too tight, and the second needed taking in at the bottom because it looked too square on me, but they looked nice and something to remember from Vietnam.

Before I went for dinner with the elderly couple I picked up my two dresses and they looked great, but one is still very tight! At dinner, it was lovely talking to different people, with fresh, new perspectives on life. They are cleaners, who run their own business, working many jobs, literally only getting three hours sleep a night, and they’ve been doing it for three years, seven days a week!! Now, they have their own retirement fund and have just taken 6 months off to go travelling! She has travelled all over the world, taking months off at a time, leaving her husband to look after the company. That is the life, not sure if I fancy being a cleaner though?

In the evening I took pictures of Hoi An- which is absolutely stunning, especially at night- and chatted with a woman about her children and life etc. I bought a bracelet from her, I want to get one from each place I go.