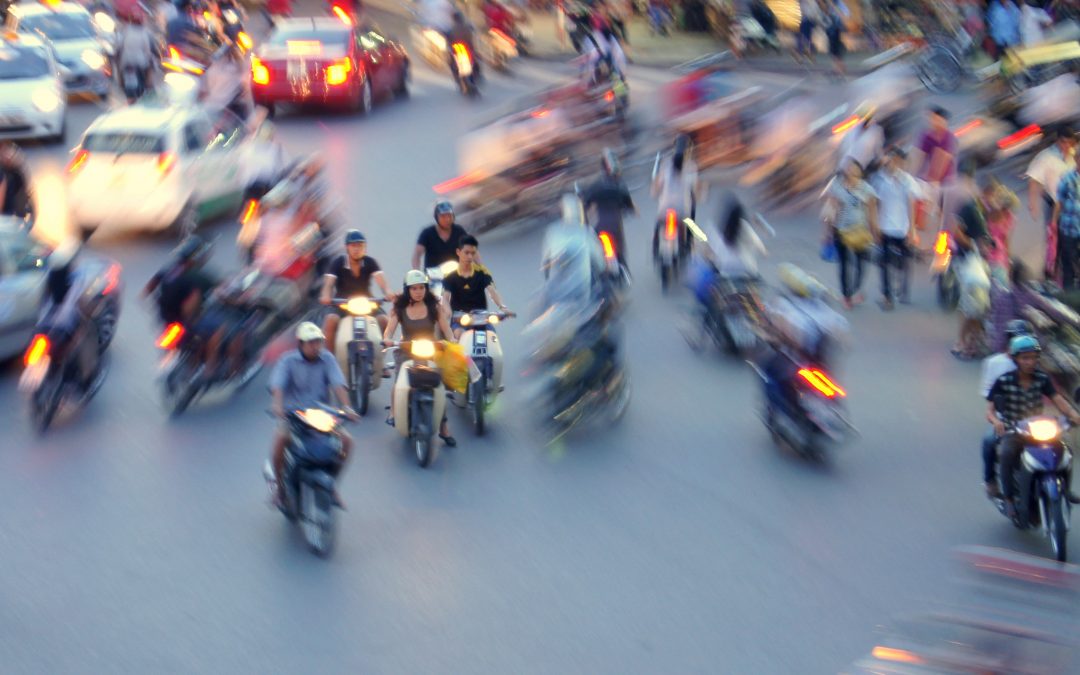 I went on my new bike for the first time today. It was petrifying!
Harry drove us to the main road where we grabbed some Pho (Vietnam’s famous beef/chicken noodle soup). He suggested that I practice on the main road.
It was a dual carriageway, but the lanes were extremely large, so it wasn’t a terrible place to start. The bike however, may not have been ideal. It was extremely heavy, moving it around is a real pain. So…I made Harry come and help me start it up. If I couldn’t even turn it on, how was I going to cope?
As we were going through this palaver, my old xe om (motorbike taxi) driver came past and saw what I was trying to do. In a very Vietnamese fashion, he didn’t hesitate to get on my bike (I presumed to test it out). I just about trusted him not to drive off with it.
He then showed me through mime how to start it up and move off. He didn’t seem to mind losing the business of motorbike taxi if I did learn! Either that or he truly had no confidence in my abilities.
Harry certainly didn’t, “This is your fault for looking so incompetent!”.
In case you hadn’t noticed, Harry isn’t great with female emotions. With females in general for that matter. Not the ideal driving instructor!
A high curbed pavement ran the length of the road. The only way down was via a small ramp; which might have been easier with a lighter bike! I ended up in the middle of the road with all the cars beeping at me.
At this point, even Harry looked a little worried.
Eventually, I pulled off, took the first right onto a quieter road and began practising. It really is quite easy, especially on empty streets. The hardest part is the rest of the nutters on the road who pull out without looking into junctions, stop in front of you with no warning, indicate in the wrong direction, etc.
I drove to the school and back to Harry. He said that he could already see that I was much better at taking corners – that was pretty reassuring. Then he suggested I drive him to the pool, but I decided not to try and run before I could walk. So, he drove me.
At the pool, there was a big hoo-ha over payment because the receptionist had become confused. The result was that I’d paid an extra 100,000VND – partly because I got confused over what we had paid. Oh well, that’s only the £3.20 for my dinner.
The pool was so lovely and relaxing. I thought to myself, life here really isn’t all that bad. Maybe I had a few things to learn.
After the pool, I decided to get some more driving practice in. Specifically, I decided to take it to where I used to live and back again. It was rush hour, the roads were hectic and rammed; it was literally the scariest thing I’ve ever done.
My palms were sweating on the brakes and my heart was pounding out of my chest. Miraculously, there were no near-misses. That is, if you exclude the times that I occasionally slammed the brakes on far too hard, performing emergency stops in the middle of the road for no reason.
Luckily nothing was coming up behind me!
I arrived back shaking in time for a well-needed beer.