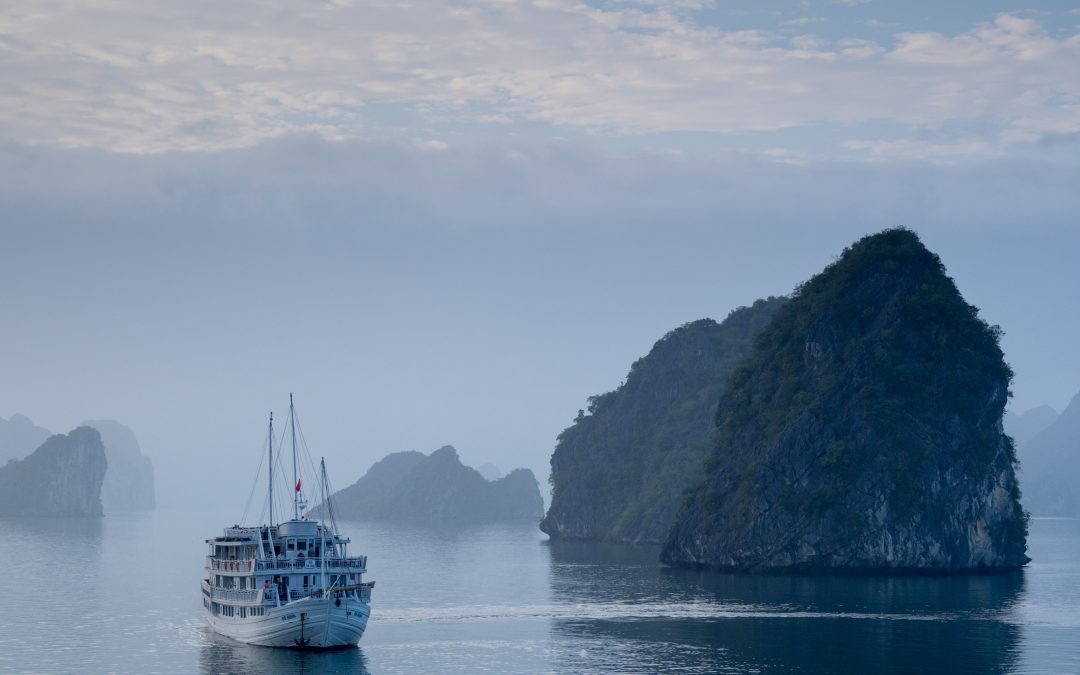 Today was my trip to Halong Bay!

When I got to Grant’s, I realised he was bringing his eight-month-old son, and that Hien’s friends were bringing their three-year-old kid. Oh dear, I was not aware of this!

I slept most of the way to Halong Bay, which is a good thing because I needed my energy when we arrived. That way I was able to deal with the hoo-ha at the hotel!

Long story short, Hien’s friends had decided that they didn’t want the room anymore because it was too expensive, so they’d told Hien the night before, who in turn had told the travel agent without telling Grant. Grant then confirmed the booking without knowing that the details had been changed.

Now that we’d arrived, Hien decided that now was the time to tell her husband that they weren’t taking the room. The hotel now had bookings for two rooms – which Grant had confirmed separately and because Grant had confirmed it, they wouldn’t accept money for just one room.

In the meantime, the other couple were stood outside and refused to come in. The hotel was in Grant’s name and claimed they didn’t know the people outside and so that we needed to pay for two rooms. Grant was annoyed because the couple had cancelled last minute and that his wife hadn’t communicated it to him.

Apparently, that’s a regular occurrence as is often the problem with inter-racial marriages in Vietnam!

He was also annoyed because the hotel even refused to take payment for just his room. A seemingly counterproductive move because it meant the hotel would get no money at all. In the end, the hotel staff insisted that we needed to cancel it through our travel agent and rebook.

Upon contacting the travel agency, he was told “But your wife said…”

You can probably guess the rest of that conversation.

At one point this conversation got so awkward that I had to leave the room to ring Harry. Purely as something to do to escape all that awkwardness! I arrived back to Grant saying he hated his wife’s friend and he was never booking anything for them again.

Anyway, an hour later everything was sorted. Finally! The room was right on a private beach that looked out into the bay, the view was beautiful!

We headed for a deserted white sand beach and dived into the sea. Grant took his son for his very first swim which was incredibly sweet. His little boy took to it really well!

We then headed to the other side of the beach for some water sports. I tried what I believe to be called Parasailing – when you get towed by a speedboat while attached to a parachute. It was phenomenal! I sat singing “I Believe I can Fly” – it reminded me of fun times with my friend from school!

Next we went banana-boating which was great fun too. Although I was slightly sad when they didn’t throw us all off like they did last time I was on one!

We headed for dinner in the 4* hotel restaurant. I enjoyed chicken with mushroom sauce and chips. I may have been too swift in claiming that you should never get Western food in Vietnam! That said there was some serious herb overkill going on!

I was a really great day and I had a lot of fun! Thanks Grant!