My Trip To DaNang Continued… 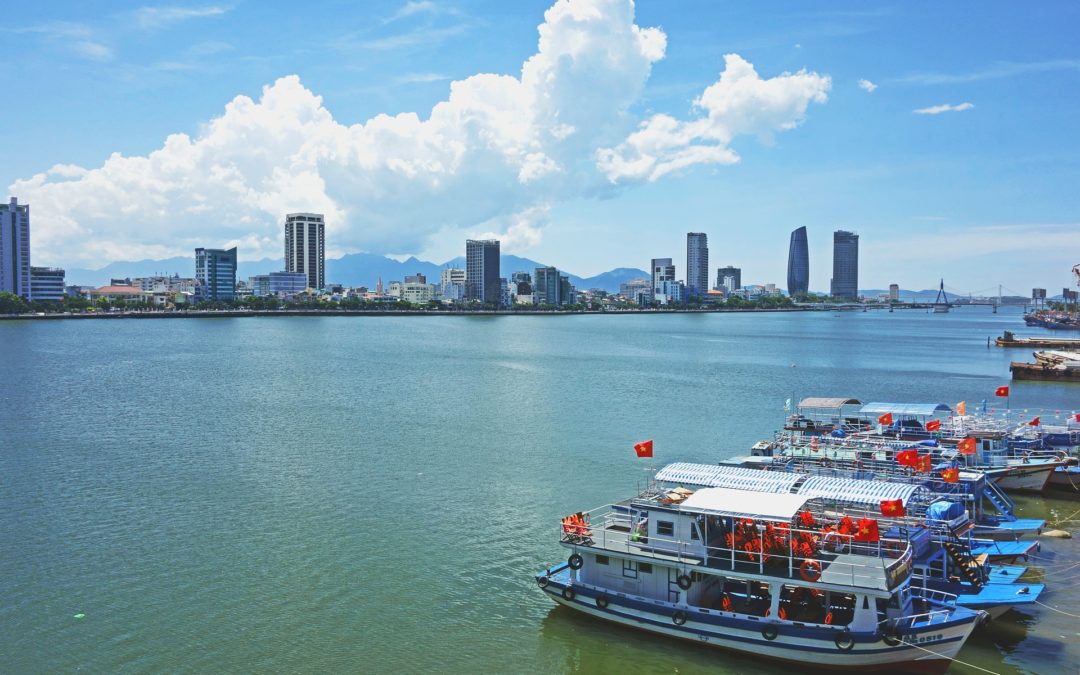 I took a taxi to the beach but ended up at Marble mountains, which is fine because that’s where I was going to go in the afternoon. It was beautiful, full of caves with marble sculptures everywhere and amazing views. I loved being on my own and did the whole thing at a leisurely pace, taking about 5 hours, as I kept stopping to read my book in secluded spots on the top of the hills. Wondeful!

I was asked to have my photo taken by various Vietnamese people, (something I am now accustomed to) including one couple where the woman’s friend was shocking at taking pictures, so it was quite amusing.

When leaving, a Vietnamese woman attached herself to me, found me a place to get lunch for extremely cheap, offered me a lift to the beach and then pushed me into her shop, where I ended up spending a ridiculous amount of money on some gifts for friends that I could have got much, much cheaper. I came out thinking what the hell just happened?! Where’s my money?! She then gave me a free lift to the beach, I have a suspicion this may be because she felt bad! I was well and truly caught in the tourist trapped and felt very annoyed…

I met a Vietnamese family on the beach, a couple with a daughter, and so spent the day with them and they invited me for dinner. This is why I love travelling alone, it opens up so many opportunities to you (ok yes, some not so good, but mostly awesome!) that you just wouldn’t get it you weren’t alone.

On my way to their hotel the taxi driver tried to charge me 260,000 vnd when it should have been 30,000, because I apparently told him the wrong way. Ass hole. I ended up paying 160,000 vnd after about 6 Vietnamese people stood around shouting at him on my behalf!

On arrival at the restaurant the dad asked me, “Do you like seafood?” Oooh dear.. I told him it makes me sick and did some gestures, to which he smiled and ordered the seafood anyway! (Again, this is very typical of Vietnam, just ignore the problem!) It wasn’t too bad, I ate some clams by just swallowing them whole, the snails were in lemon grass and so tasted nice but I couldn’t get them out the shell, so the wife had to do it for me! There were some more fishy clams but I managed to avoid these (after spitting my first ones out into my napkin) and some very nice rice and shrimp soup. Desert was, according to the dad, “very expensive” and they had brought it with them especially, looking very pleased with themselves. It was disgusting, bright yellow, and slimy, and it smelt foul, and tasted a bit like chicken…. I just kept saying I was full…. And mashed it up into my bowl when they insisted I still ate! I found out later that it was the infamous Dorian fruit. Go on, try it, I dare you!

They then took me to see the Chinese Dragon bridge, where apparently they spend $1000 every Saturday making the dragon breathe fire! To be honest the water that it poured out after was more impressive than the fire breathing but it was a great day, and the dad text me after saying he hoped we could be “best friends for life” !

I paid $35 to do a tour to Ba Na hills, which in Vietnamese terms is very expensive, but I had heard good things about it. The 15 minute cable cart was nice, but the top was awful. It was my mum’s idea of Hell, some sort of Disneyland gone wrong! It was all under construction, building a massive castle complex on the top of the mountain. What a way to spoil the view! There were only two attractions open, a Pagoda, and a “rides” section. The rides were basic at best, and I took pictures as two American/Vietnamese women who I’d befriended went on all the spinning things. I enjoyed the dodgem cars, it occurred to me that most Vietnamese people do not drive cars, so for once I was the best driver on the road, haha!

The tour guide was useless and kept losing everyone, but it didn’t help that the place was packed full of Vietnamese holiday makers. We were meant to get free entrance to a 100 year old wine cellar, but the tour guide had disappeared with our tickets…

Lunch was also disappointing, considering we’d paid $35, I was not expecting to go to a street food café! However, the Vietnamese ladies who I met were lovely and we had a good day  together, exchanging numbers at the end.

Back at the hotel I went to sunbathe by the pool but a large cloud came over almost as soon as I lay down, followed by a large group of screaming Vietnamese children!! (The Vietnamese swim in the shade of the afternoon, not the midday sun).

Back in the hotel I was devastated to find that what I thought was a free massage was actually just a discounted one, but I decided to get one anyway. Again, not used to how these things are meant to work I found myself standing in my bikni, not sure whether to lay on the bed or wait standing up, should I shower first, or use the steam room? Should I call someone to say I was ready?! Eventually the lady came, and it was a very good massage, except she did a horrible thing where she unexpectedly flipped my neck round and cracked it without warning…

I headed to the town centre for dinner to find that all the restaurants were serving seafood and only had menus in Vietnamese, so I bought some chips from a café and walked along the beach front by night, which was very nice, before returning to my hotel for dinner!